FIRST ON FOX: The Biden administration is taking criticism from former U.S. officials and lawmakers from both parties for what they call a ‘flagrant betrayal’ of the Iranian people — after the State Dept. distances itself from a top Iranian dissident group, which it said it does not see as a ‘viable’ alternative to the existing regime.

A State Department spokesperson this month told media outlets that it ‘continues to have serious concerns’ about the Mujahedeen-e-Khalq, or MEK, including long-standing allegations about abuse committed against its members.

The MEK is the main branch of the National Council of Resistance of Iran (NCRI) — an umbrella group for Iranian dissident movements opposed to the regime. While the MEK was designated a terrorist organization in the 90s, the group has renounced violence and that designation was revoked during the Obama administration.

Relations warmed during the Trump administration as a number of top officials, including former Vice President Mike Pence, former Secretary of State Mike Pompeo and former National Security Adviser John Bolton have given the group its support and spoken at events. But its support extends beyond the Trump administration to former Bush officials, as well as Democrats and Republican in Congress.

It has set up a compound in Albania, which was visited by Pence earlier this year, and has held conferences in Europe, including a 2018 event in Paris which was attended by Rudy Giuliani and which was the target of a failed terrorist attack.

‘I have traveled more than 5,000 miles from my home in Indiana to be here today because we share a common cause: the liberation of the Iranian people from decades of tyranny, and the rebirth of a free, peaceful, prosperous and democratic Iran,’ Pence told activists in Albania in June.

The MEK calls for a democratic, secular and non-nuclear Iran, and has also vehemently opposed the 2015 Iran nuclear deal — which it has slammed as an act of appeasement of the theocratic regime in Tehran. It supported the Trump administration’s ‘maximum pressure’ campaign and has opposed efforts by the Biden administration to revive the 2015 deal and roll back sanctions.

The statement by the State Department comes as those efforts have appeared to have failed, with talks in Vienna stalling, and also as the Iranian regime is dealing with some of the fiercest protests it has faced in years after the death of a young woman in police custody.

Former US officials statement on MEK by Fox News on Scribd

The apparent distancing of the administration from the MEK has sparked intense criticism from a number of former lawmakers and U.S. officials, who put the blame for the statement at the feet of Special Envoy Robert Malley and accused him of seeking to appease the regime by criticizing the dissidents.

‘We understand that Mr. Malley’s primary mission in Iran is to resurrect the JCPOA. What Mr. Malley needs to understand is that his action, taken while tens of thousands of Iranian women and men are fighting and dying for freedom from tyranny, is a flagrant betrayal of both the Iranian people and a foundational principle which our country has long honored,’ the statement says. 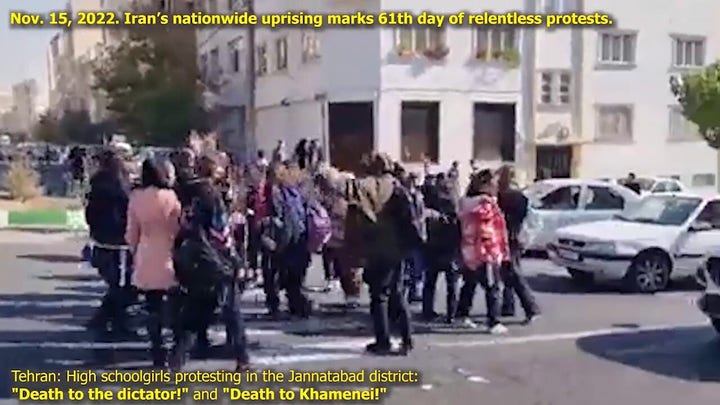 They say that the MEK/NCRI platform is ‘based on the principles of democracy and religious freedom’ and say that its president-elect Maryam Rajavi ‘has been publicly advocating for a free, democratic Iran in the face of regime assassinations, kidnappings, terrorist bombings and disinformation.’

They go on to say that the attack ‘on a major opposition group which shares American principles of human rights and democratic representation dangerously undermines the credibility of the entire democratic opposition.’

They say that if Malley ‘believes that adopting the regime’s false, anti-MEK propaganda will persuade the terrorists to revive JCPOA negotiations, he needs to be relieved from this important mission.’

The State Department rejected that claim: ‘Our assessment of the MEK has nothing to do with our concerns over Iran’s nuclear program or the Iranian regime’s ongoing crackdown against peaceful protestors and abhorrent treatment of women.’

Meanwhile, a spokesperson for the MEK said the acknowledgment that it has not received support from the U.S. ‘reflects the independence of this movement.’

The future of Iran will be determined by our people and freedom fighters in the campaign for freedom in the streets of Iran now and through the ballot box tomorrow,’ spokesperson Shahin Gobadi said. ‘Foreign powers have nothing to do with it. Such a position is a response to pleadings and the dire need of the religious dictatorship on the verge of being overthrown.’

The controversy comes as the Iranian regime continues to crack down on the protests that have engulfed cities across the country. At least 300 people have died, and more than 14,000 have been arrested, since the protests started in mid-September. Some estimates put the number as high as 350 dead and over 15,000 arrested.

He can be reached at adam.shaw2@fox.com or on Twitter.